Every day we see stories about weight in the media. How the ‘obesity epidemic’ is killing us on a grand scale. How childhood obesity is a ‘ticking timebomb’. How people should ‘take responsibility’ for their health/weight and eat less and exercise more. How this celebrity lost dramatic amounts of weight on that latest fad diet. How taxing sugary drinks – or now confectionary items – will help the ‘war on obesity’. A media personality or lifestyle guru directly calling out, shaming and blaming individuals in larger bodies – often parents, and especially mothers. You just can’t avoid stories like these. And then there are the images accompanying such news items. Images of adults or children in larger bodies feasting on burgers, children in larger bodies playing computer games sitting on a sofa, or a headless person in a larger body dressed in minimal clothing on a beach, or a young child in a larger body with ill-fitting clothes, or even no clothes from the waist up, and a measurement tape around them are commonplace. Such imagery portrays individuals with a higher weight as gluttonous, lazy, lacking willpower, and unworthy of a head or a face. And then you get the comments below the articles – do not go there! 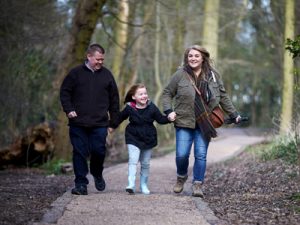 So that’s okay, right? This is all newsworthy stuff. It’s fair game to call out individuals for living in larger bodies – and parents for ‘causing’ their children to be larger in size – and to use any and all necessary language and imagery to highlight their wrong-doings and save them from themselves?

That would be, a resounding no. Stories and imagery such as this are actually harmful, and research backs this up. When people hold negative weight-related attitudes or beliefs towards people in larger bodies, this is known as weight bias. When expressed, as discrimination, stereotyping, and social exclusion, this is called weight stigma. Common stereotypes include that people in bigger bodies are lazy, unintelligent, gluttonous or lack self-control. Many people, even some of those involved in promoting health, believe that using such shame-inducing tactics to change people’s behaviours in terms of weight will ‘help’ them to lose weight. In fact the opposite is true.

Weight bias – whether conscious or unconscious – is commonplace. Doctors and other health professionals can hold negative beliefs against people with a higher weight, as can prospective employers, educators, as well as family and friends. While we don’t have statistics for Ireland, research in the US has found that the prevalence of weight discrimination is on par with that of racial discrimination. It also develops from a very young age. Children as young as three years of age demonstrate a preference for thin and average-size bodies and an aversion towards bodies of a higher weight. Often however the greatest source of bias is held by people living in larger bodies themselves, when they internalise weight stigma and blame themselves for their perceived overweight. Talk to anyone living in a larger body and they will tell you about their experiences.

“Living every day in a larger body, you are aware of what people think of you – after all, you are told often enough! You are so happy to go through one day when someone you meet looks at your face and engages with you like a human, rather than constantly looking you up and down. Why is this judgment necessary? I’ve been of a higher weight since I’ve been seven years old and have had a lifetime of looks and judgements. But I am still a person, like you. I can’t tell what is going on in your head or life, but you think you can judge my life just because of my body? It is relentless and constant talk of the ‘obesity crisis’ adds to the continuous stress. If I could choose to have a smaller body, I would. But for me it is not a choice, and that is what many people don’t understand. Obesity is not a choice. It is a condition which makes it very difficult to maintain a lower weight. If the media and general public was interested in finding out more about this and understanding the facts, they could easily do this. But facts don’t make great headlines. Addressing the drivers of obesity; poverty, health inequalities and our obesogenic environment, including our food and built environment is where we all should spend our energy. But no, it is much easier to write shaming headlines than it is to get curious about how we might actually help people.” – Fiona Quigley, PhD Researcher, Ulster University

Weight and obesity are really complex issues. It’s impossible to address them in media soundbites. Contrary to popular opinion, it’s not as simple as eat less and move more. Weight is determined by many different things, including genetics, biology, the environment, and economic factors. A person’s weight is 40-70% determined by their genes. The environment they live in will either help to protect them from weight gain, or promote it. A person’s biology also impacts on their weight – the human body is designed to defend its weight. So if you lose weight, the body will work to bring its weight back to the “setpoint” (usually the highest weight a person has ever been). This is why maintaining weight loss is so difficult. Often in weight management the focus is on supporting people to achieve their ‘best weight’, even if that is a higher weight. It is simply incorrect to argue that individuals are largely in control of, and responsible for, their body weight or size. This type of narrative feeds into a blame culture and into negative stereotypes and discrimination. We need to respect body diversity – bodies come in all shapes and sizes.

Media articles and imagery often generate weight stigma and discrimination towards people in larger bodies – either directly and/or indirectly. Such stigma spills over into online comments, media interviews and public debate. Media coverage of weight issues is often one-sided, stigmatising, and harmful; in part due to the levels of weight bias within society. Advertisements running alongside articles can reinforce negative stereotypes, for example, advertisements for foods high in fat and sugar printed beside articles that discuss limiting such foods in order to promote better nutrition. All of this can exacerbate weight stigma and discrimination within society. Research on Irish media reporting of obesity is limited, however, work by Dr Aoife De Brún and colleagues found that coverage has increased over time. They also found that in terms of reported causes and solutions, there has been greater focus on behavioural factors, while the focus on genetics has been consistently low, but environmental stories have become more frequent. Parents, specifically mothers, attracted much blame for childhood obesity and media messages aimed to shame and disgrace parents of children in larger bodies through use of emotive and evocative language.

My colleague Susie Birney (Patient Representative with the Association for the Study of Obesity on the island of Ireland, and Secretary of the European Coalition for People living with Obesity, ECPO) says she has heard many people living with obesity blame themselves as they struggle with their self-worth. Whether it is avoiding family occasions, not going for job interviews, being too ashamed to join a gym, or indeed avoiding appointments with health professionals, she has witnessed the detrimental effect for the mental and physical well-being. It is emotionally exhausting to face the stares, judgements and stigma shown on a daily basis. Susie has been actively involved with the ECPO in a People First Campaign which is trying to change this negative narrative to a positive one.

So what can media do to promote more positive, respectful discussions around weight – that help rather than harm? Weight stigma is often described as the last acceptable form of discrimination. In Ireland, there are nine grounds for discrimination –  gender, marital status, family status, sexual orientation, religion, age, disability, race and membership of the Traveller community. Weight is not one of them. During the summer, the Washington State Supreme Court ruled it was illegal under state law to refuse to hire someone on the grounds of obesity, as employers would be violating laws that prohibit discriminating against someone with a physical impairment. Principle eight of the Press Council of Ireland’s Code of Practice states that “The press shall not publish material intended or likely to cause grave offence or stir up hatred against an individual or group on the basis of their race, religion, nationality, colour, ethnic origin, membership of the travelling community, gender, sexual orientation, marital status, disability, illness or age.” Perhaps it is time for the Press Council of Ireland and The Press Ombudsman to include weight in their code?

In the US, a group of organisations working in the area of obesity came together to produce media guidelines for the reporting of obesity. We do not have such guidelines for Ireland, or indeed Europe, but similar principles apply. Language also matters. While there are no universally accepted terms to describe bodyweight, it is better to use people-first language – so a person living with obesity or a person in a larger body, rather than an obese person. While some individuals prefer to identify as living with obesity, others do not. It is important therefore that people talk about what their preferred terms are, e.g. during interactions with health professionals. War language isn’t helpful either. In recent years there are increasing calls to end this type of language when talking about cancer, for example, ‘end the fight against cancer’. The same applies to weight and obesity. Military language can place undue emphasis on individuals – often the war is on individuals, and places emphasis on personal responsibility for health and weight. As discussed earlier, weight is a complex issue and weight maintenance is biologically difficult so people should not be described as ‘losing the war on obesity’ when it is an unfair ‘fight’ in the first place. There are also royalty-free image banks which media and others can use that portray people in larger bodies in more respectful and positive ways. Again, we do not have an image bank (yet) for Ireland but we can access image banks from organisations such as World Obesity, Obesity Canada, U-Conn Rudd Center and Obesity Action Coalition. People in larger bodies are advocating for change in this area also. For example, in response to media imagery, people living with obesity recently started a campaign on Twitter with the hashtag #WeHaveHeads.

What we don’t see enough of in the media is the wider issues around weight and obesity. It is easy to focus on individuals, and sensational headlines and stories that sell newspapers. Media could cover more stories concerning the broader issues that impact on a person’s weight – such as poverty, employment, education, and commercial influences. By acknowledging the complexity of weight and obesity within articles – and the fact that there is no one solution to enabling people to achieve their best weight – the media would provide more balanced coverage and hopefully this would stimulate more sensible, thoughtful and respectful debate.

Each and every one of us has a role in ending weight stigma. How we talk about weight and obesity – and all of the related issues – is important, whether it’s in the media, in advertisements, or in our everyday interactions.